The joys and trials of growing crops at Ebenezer 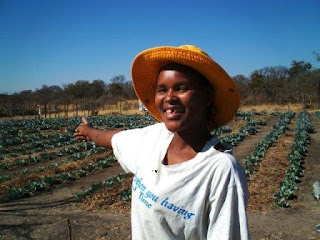 Pretty Moyo
I came to Ebenezer on the 7th January 2008. I was so excited to be given a chance to learn more about business at Ebenezer. I started to prepare my fields and put a lot of energy into my work. I was preparing for tomatoes from 8 January until the 28th February. I transplanted my tomatoes on the 29th February. The tomatoes were growing very well and started flowering on the 1st April. Then cattle came into my field and ate 465 tomatoes and 300 tomato plants were left. On the 7th April, the cattle came back and ate the rest of my plants. I was quite disappointed. The team at Ebenezer helped me put a fence around my field to protect my plants from animals. 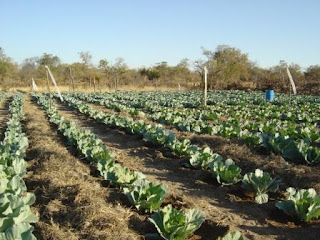 On the flip side, we have another apprentice, Honest, who worked really hard in her field and came out with another story…….

My field was well prepared. I added manure and humus to make the soil more fertile and it was well watered. I then transplanted my cabbages on the 24th May 2008. During the first month after transplanting, I told myself that I would have a good harvest but the exact opposite happened. Some of my cabbages began to get affected by aphids and some had stunted growth due to the poor soils and loss of calcium. About 450 cabbages were eaten by bush bucks. There was nothing I could do and I was worried as this loss would affect my business. 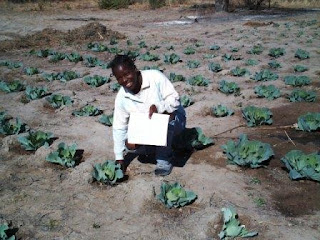 Honest looking at her cabbages that are struggling to grow
Some solutions were put in place to make sure that my crops would succeed. I put in a fence around my field and learnt how to treat my plants which are affected with aphids. Ebenezer hired security guards to patrol during the evenings and look after the apprentice fields. I felt encouraged.
Some of the cabbages that were uprooted were cut and I began to dry them so that I could bless the community. I started to then realize that all my efforts were not in vain but would be a blessing to the community. I am looking forward to my next crop. 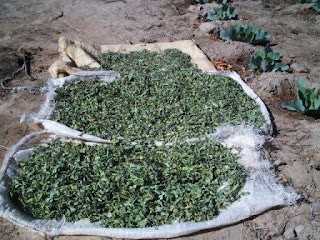 Posted by ebenezer agricultural training centre at 7:50 AM