Stronghold of Tribalism/racism by Sam Poe 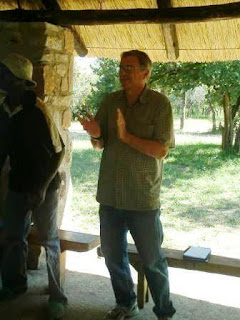 Sam Poe
Sam told the story of Jephthah from Judges 12:1 – 7. Jephthah was one of the judges in Israel. The story is set in the day of Judges when everyone was doing what was right in their own eyes. We read of how 42,000 Ephriamites died in the conflict and aftermath. It’s a sad story of tribal hatred that broke out amongst close tribal peoples in Israel.

It started out with pride and the problem of arrogance. Hatred grew until civil war broke out. God ordered it that we are part of a people group and culture. Every tribe, people group, nation and so on is valid. God wants a people group, he wants to save people groups and it will be pretty colourful in heaven.

Tribalism/racism isn’t the problem but it’s the arrogance that says “we are superior to you” and it grows derogatory.
Words like barbarian – a Greek word that is derogatory to cultures that couldn’t speak Greek or Latin and made fun of them. The travelling people were looked down upon. The Greek culture had a stronghold of “civilized and uncivilized” which is inappropriate. Who decides what or who is civilized or uncivilized? So-called “civilized” nations have done atrocious things.


How do we demolish the stronghold of tribalism or racism?God’s purpose is to create one new man and to create peace. He delights in certain parts of all the cultures. Colossians 3:11 “…where there is neither Greek nor Jew, circumcised nor uncircumcised, barbarian, Scythian, slave nor free, but Christ is all and in all.” All languages will be represented in heaven. What is the splendor of the nations and languages in heaven? ALL have expressions and beauty that glorify God. This revelation will demolish the stronghold. Revelations 21:24 “And the nations of those who are saved shall walk in its light, and the kings of the earth bring their and honour into it.”


Summarised by Molly Manhanga
Posted by ebenezer agricultural training centre at 8:16 AM