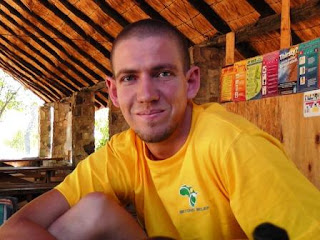 It was wonderful catching up with Ezra Prescott at Ebenezer recently. Him and his wife Martha are walking miracles. Ezra is part of the Beyond Belief initiative and works with the chicken farmers in and around Mablauwuni village.

To cut this story short, Ezra took his wife away for a weekend to some lodges, with a waterfalls being an attraction. However, once Ezra had climbed to the top of the 30m or so waterfalls, he slipped and fell head first. There was no water at the bottom and his landing knocked him out. His wife Martha saw him 'slide' down and followed suit in a sitting position. Her landing caused both her feet to break, her left wrist was broken and she also had back injuries. Ezra suffered from memory loss for about 15 minutes. He had head, neck and shoulder injuries. Martha lay in a stream for about 3 hours but luckily they had a doctor friend with them who made sure that Martha wasn't moved without proper care and medical attention.

Both Ezra and Martha were in hospital for 8 days and they are both expected to make a full recovery. That can only be the hand of God on their lives. He certainly specialises in the miraculous.

By Molly Manhanga
Posted by ebenezer agricultural training centre at 2:33 AM