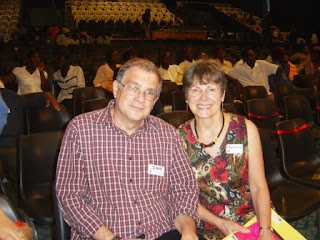 Sam and Marlene Poe
We are so blessed to have Sam and Marlene Poe from Tacoma, USA serve us in Kezi, Bulawayo, Zimbabwe. Sam is currently doing a series on Demolishing Strongholds with the apprentices at Ebenezer Training Centre. He introduced this topic by saying that we are at war as Christians and our warfare is not against people but against the powers of darkness. We are in a battle that Jesus has already won.

Ephesians 6:10 – 12 “Finally, be strong in the Lord and in the strength of his might. Put on the whole armor of God that you may be able to stand against the schemes of the devil. For we do not wrestle against flesh and blood, but against the rulers, against the authorities, against the cosmic powers over this present darkness, against the spiritual forces of evil in the heavenly places.” Paul is writing, be strong in the Lord and in the power of His might. God gives us the Holy Spirit for us to be strong. He also gives us armor to put on. Paul is speaking about spiritual warfare. We need to stand against the devil’s schemes. God is building His Church. In the community we have Crossroads Community Church and when a church is built in the community, Christians are declaring warfare. If we’re part of the church, we’re involved in God’s army. When the church goes on the offensive, there will be counterattacks from the enemy. We mustn’t ignore the fact that we’re in a battle but we also mustn’t become too preoccupied with the devil. Our focus is on Jesus. In principle, we have already won the battle but the enemy is deceiving people and trying to keep people in captivity.

2 Corinthians 10:3 – 5
Paul uses the term “strongholds” meaning the weakest point of entry is wrong thinking. These strongholds are arguments that set themselves up against God. Strongholds are wrong thoughts. We need to have the word of God in our mind.
We need to stand on God’s word and throw out all the lies. As a Christian, we can believe what is not true and that can be a stronghold. Strongholds gain power in our lives through:
1. Culture – Every culture has strongholds. There are parts of culture that are helpful and good.
2. Habitually sinning – e.g. Judas had a stronghold in his life: loving money more than anything else.
3. Emotional wounds – hurtful, offensive things that happen to us.
Jesus comes to set us free from strongholds. When we believe God’s word, Jesus comes against strongholds which exist in secret. People carry dark secrets. When brought to the light, the stronghold breaks down.
Summarised by Molly Manhanga
Posted by ebenezer agricultural training centre at 2:36 AM