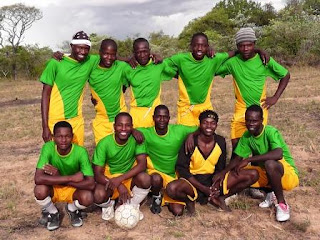 
Loud music in the dining hall is a real stimulator for the apprentices and it was no different as they readied themselves for the soccer match against the community. Ebenezer looked “chic” in their new kit.

The first half was really entertaining as both sides were getting a feel for each other and for the soccer pitch. Players would sprint after the ball and “trip” by themselves, having a rather hard landing on the ground or guys would jump in an attempt to head the ball and somehow trip and land on their backs. Not to mention players “timing” the ball that is coming in their direction and kick really hard – only to have kicked the air as the ball continued to roll past. That was really funny and caused a lot of laughter on the pitch. 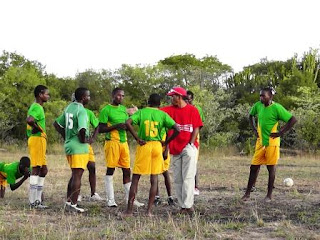 
Ebenezer had many chances to score in the first half but those goals were elusive. As it always happens, when the opposition get a break, they head straight for the goals and score. The community did just that and they were ecstatic. Their energy levels rose as they seemed to outrun and outplay Ebenezer. A second goal followed and it was Ebenezer 0, Community 2. At half time, Stephen Manhanga gave the Ebenezer team a pep talk and spurred them on despite them being down 0 – 2. Ebenezer FC’s game improved immensely in the second half. As they led an attack on the opposition and attempted to score, the ball hit one of the opposition defenders and deflected into their goal. “An own goal” – most welcomed by the Ebenezer players. The score – Ebenezer 1, Community 2. The Ebenezer players came alive and got their act together. The pace of the game increased and Ebenezer scored a second goal. That was good to see. It could go either way now. The community tried to make a come back and missed several chances to score. The final whistle blew and the score stood at 2 – 2.

The Community asked for 20 minutes extra time and the game continued. There was much pressure from both sides until Ebenezer scored. The final score was 3 – 2 to Ebenezer. The players walked away feeling very proud of themselves after having made a come back from being 0 – 2 down in the first half.

Posted by ebenezer agricultural training centre at 9:34 AM