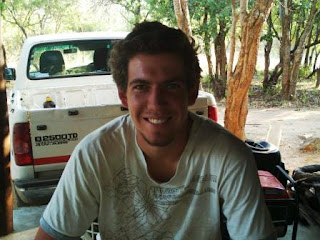 Ezra is originally from Bulawayo. He moved with his family to the U.K at the age of 11. He did his schooling in the U.K, got some work experience and is now back in Zimbabwe. He is serving at Ebenezer for a while (He is uncertain at the moment as to how long he’ll be with us….)

M.M: What do you do to relax?
E.P: I enjoy taking in the scenery and raddeling rams

M.M: What is your favourite quote?
E.P: “If the bowl we used at mealtime was wooden and made by one’s own hand, there would be no war.” (Roman soldier convert)

M.M: Who is your favourite Bible character?
E.P: John on the Isle of Patmos

M.M: What is the weirdest food you’ve ever eaten?
E.P: Sheep’s milk straight from the udder

M.M: What is it like being back in Zimbabwe?
E.P: Some things are worse than I expected them to be while others are better than I expected. I’ve been struck by the people I’ve met. There are faithful people who have stuck it out. Some had to while others chose to.

M.M: Thank you so much Ezra. I really hope you have a fantastic time with us at Ebenezer.
By Molly Manhanga
Posted by ebenezer agricultural training centre at 11:36 PM

You can't be serious said...

Greetings from the U.S.
I was wondering if Gerald Mangena was still with the Agricultural Center. My wife and I met him on his last trip with ACTS while we were in Zambia in 2007.
We have pictures from our last 3 trips to Zambia that continually show on our computers screen saver and we pray for those people as we are reminded of them.
gerald has been are our hearts recently and were just curious how he is doing.
If he is still with you, could you have him email me at rikel@att.net
We would appreciate any help you could give us.
I have been blessed reading your blog and the work you are doing there. May God continue to Bless you.
Paul Rikel