Ebenezer’s Graduation Day
The 1st year apprentices did extremely well in helping with catering and the general running around while the 2nd years – the graduates celebrated ‘their day’. 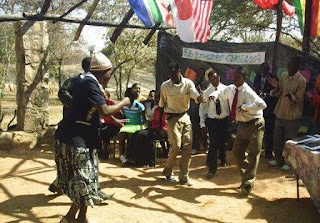 Apprentices enjoying themselves at graduation

The support from the parents and guardians was wonderful. Each apprentice received a Bible, a certificate, wheelbarrow and a hoe. 5 apprentices received special awards for their efforts over the 2 years. The best apprentice in Agriculture was Mqondisi Moyo, in Business was Thabani Sibanda and in Spiritual was Mkhululi Ncube. The apprentice that excelled all round was Brilliant Khoza while Sithabiso Thsuma received an award for exemplary behavior. These apprentices received a rake and shovel on top of the other awards. 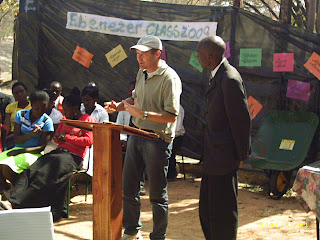 Highlights were listening to Peter Cunningham and Scott Marques’ speech. Peter spoke about Jesus being our Guest of Honour; that He is the original vision Creator: He saw Ebenezer, planned it, was excited by the lives of the apprentices and is honoured by it. Ephesians 1:11. Peter painted the Kezi of Ebenezer, Kezi, Zimbabwe, Africa and then the map of the world saying how God chose us and each apprentice is especially known by Him. 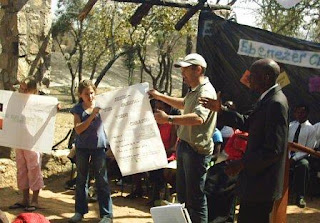 Scott Marques followed after Peter had spoken and he reiterated again that each apprentice was chosen by God. He read from 1 Thessalonians 4:1 – 12 and encouraged the apprentices to live peacable lives, to abstain from immorality and to work with their hands. Scott got the apprentices to jump from their seats and shout “I’m chosen”. The apprentices did this energetically, believing the truth of those precious words that they are chosen by God. 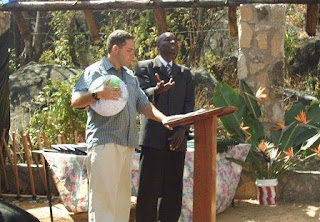 Scott Marques speaking to the parents

The apprentices rounded off the graduation ceremony with a song.
Lunch followed and then a volleyball tournament between the Ebenezer staff comprising of Scott, Peter, Steve, George, Tendai and Mbonisi versus the 1st year apprentices and the 2nd year apprentices. The staff lost their first game but were unstoppable after that.

Posted by ebenezer agricultural training centre at 1:39 AM