Getting to know Zulu Martin Dube 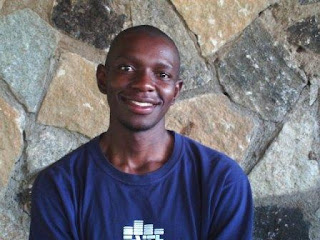 A team of people representing Farming God’s Way and Faithful Stewards visited Ebenezer. They met with farmers in the community, visited homesteads and chatted with children from child headed households (C.H.H. – this is where both parents, grandparents or guardians have passed away or are living elsewhere, leaving the child to run the home and in some instances, the child will also take care of their siblings) I had the opportunity of interviewing Zulu Dube who is part of the Faithful Stewards programme and he is based in Harare.

M.M: Zulu, tell me something about your background?
Z.D: I was born in Kitwe, Zambia and my family moved to Zimbabwe when I was two years old. I’m the second born in a family of 5. I have one older brother, one younger sister and y twin brothers are the youngest in my family. I grew up in Bulawayo until I went to the University of Zimbabwe. I studied Biochemistry and Chemistry for 4 years. After university I was between cities – Harare and Bulawayo. I worked as the retain manager at one of the Edgars (Clothing shop) group of stores in Harare for 3 years and then I also managed an Edgars branch in Bulawayo for 6 months.
I married Yeyukai in October 2007. She is a medical doctor practicing at Parirenyatwa Hospital. (Parirenyatwa is one of the local hospitals in Harare)

M.M: When and where did you become a Christian?
Z.D: I became a Christian in 1993 at a Scripture Union meeting in Milton Boys High School in Bulawayo.

M.M: How did you get involved in the work that you are doing now?
Z.D: A friend of mine, Tongai Mahobele, one of the elders at River of Life Christian Church in Westgate, Harare was instrumental in me working where I am now. I am part of the Faithful Stewards programme which is the farming arm of God’s Way Foundation.

M.M: How many sites do you oversee and how often do you monitor and evaluate the site?
Z.D: I oversee 3 sites. One in Nyabira, which is about 30km outside Harare. This is a new site. The other sites are in Bulawayo, one in Mguza which is 10km outside the Bulawayo City centre and the other at Ebenezer, which is an hour’s drive from Bulawayo City Centre. 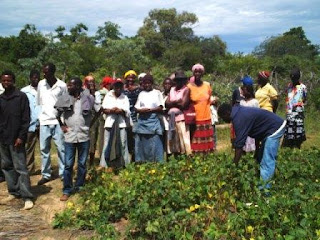 The team having a time with the local farmers that are trained by Stephen Manhanga
M.M: How best would you describe your assessment of the site at Ebenezer?
Z.D: I’m happy with the progress. These are first time farmers who planted their crops in accordance with the Farming God’s Way standards. Weeding needs to improve and there were some instances of intercropping. However, we have seen the largest cowpeas EVER being grown in this area. Cowpeas are a legume plant in the bean family. The standards at one of the farmers homes is excellent. Overall, we are happy with the work being done and with Xolani and Portia’s relationship with the farmers. Xolani and Portia work at Ebenezer Agricultural Training Centre.

M.M: Great. From your visits to the homesteads within the community and your interviews with the farmers, do you feel that your programme will benefit and enhance the lives of people in the community?
Z.D: If the programme is taken on wholeheartedly by the vulnerable people we visited, it will enhance their lives. Farming God’s Way will ensure higher yields but it means commitment to the process and to work hard.

Thank you so much Zulu. God be with you as you travel back to Harare. 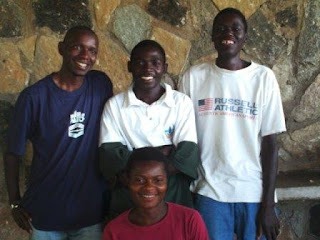 Zulu and team from Harare, Zimbabwe
Interviewed by Molly Manhanga
Posted by ebenezer agricultural training centre at 7:46 AM