It’s just great when special friends visit across continents and that’s what it was like when Matt Hosier and team from Poole, U.K, visited us in Kezi, Zimbabwe. They spent a few days with us in rural Zimbabwe and we are hoping they enjoyed themselves and drew closer to God. This is a snapshot of their days with us……..

Wednesday 26th November: We drove back to Kezi in the cool of the day and went via the Matopos Game Park. It was wonderful seeing some wildlife like rhino, sable, warthog, baboons, monkeys and so on. A great start to see the wondrous beauty of life in Zimbabwe. We arrived at Ebenezer Agricultural Training Centre when it was dark. There is no electricity at Ebenezer, so the visitors ate their dinner in partial light. Going by the taste of the food, it seemed quite enjoyable. We then made a huge circle around a fire and had a Cell meeting. We prayed, sang songs, danced and celebrated God’s presence with us. Matt shared about the beauty of God’s creation focusing on the stars which made everyone think of Abraham. We then took the exhausted team to Pumula – a farm house that they were staying in for the time they were with us. Pumula means REST. On arrival at the house, we were greeted by a variety of bugs which were drawn to the lights in the house. Our gracious visitors took it all in their stride.

Thursday 27th November: After breakfast, the team went for a tour of Ebenezer. They looked at the rabbits, the tomato plants, the dorms, the buildings in progress and so on. The tour was led by Stephen Manhanga and George Mlilo. 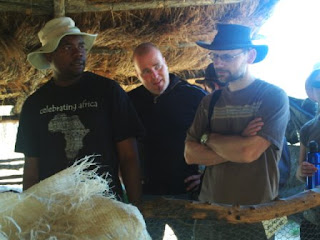 George explaining to Mark and Steve about the rabbits at Ebenezer
It was awesome when the team had the opportunity to meet a local delegation that was visiting Ebenezer at the same time. This delegation included local community heads, the councilor and local development committee members that we are building relationship with. After tea, the team sat in on an enjoyable spiritual lesson led by Stephen Manhanga. Of particular interest was the story of Joseph which is very inspirational and encouraging. A combined lunch between the visiting team, the local authorities and Ebenezer team was excellent. The combined luncheon spurred the local authorities to comment on the genuine Christian unity that is among us. What a testimony!
After lunch, the team was paired up with a few apprentices and went to work in their fields. There were no complaints despite the hot sun blazing down. Matt & Georgie Hosier were teamed up with Msizi Mwale, Steve & Rowena Cox went up with Mqondisi Moyo and Mark & Lydia Absolom were paired up with Mbusiso Ndlovu. It was interesting seeing the team scouting, pruning or planting tomatoes or weeding in the apprentice fields.
The young ladies: Georgie, Rowena and Lydia were “rescued” from manual labour to attend a birthday bash – ‘girls’ only. Everything was prepared by the female apprentices and it was delightful. God was at the centre and really fun filled. After the party, the ladies went canoeing and were joined later by the men. Quite an eventful day!

Friday 28th November: A highlight of Kezi is seeing the beauty of Gods creation and what better time than at the start of the day. Sunrise devotions were a “sweet” time with God. Cool, fresh, morning air overlooking a mountainous, scenic view. A song written by Isaac Watts in 1719 brings the experience to life:
1st stanza only, Give to our God immortal praise;
Mercy and truth are all His ways:
Wonders of grace to God belong,
Repeat His mercies in your song.The visit to the community followed next and was quite enlightening. We stopped at Mr. Thebe’s house. Mr. Thebe is one of the community leaders. He wasn’t at home but he and his wife were busy with their cattle. We walked to where he was and received a great welcome from him and his wife. 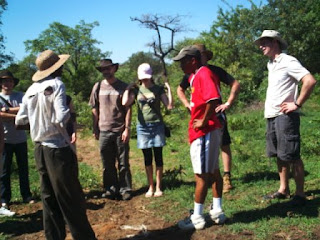 Team chatting to Mr. Thebe
We went to his home to see the baby ostriches they were rearing. Our next stop was at Nduna Primary School – one of the local primary schools in the area. Despite the obvious material lack, seeing the smiling faces of the children and their desire to learn is so inspiring. Our final stop was at Crossroads Community Church where Steve explained that we are hoping to clear the land, build a church and a community centre.
After tea, Steve Cox did an excellent presentation on Trees and Matt Hosier encouraged and motivated us from the word of God. As part of his “encouragement”/presentation, Matt used a two and a half meter snake that the apprentices had killed earlier on that day to illustrate a point and as part of his teaching aid. Brave man! 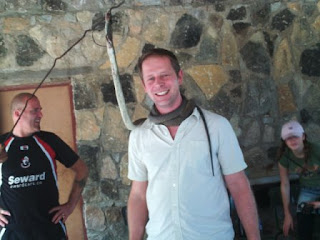 Matt with a snake wrapped around his neck. Mmmm!

The afternoon was free and as Matt went to Bulawayo, the rest of the team stayed on to help with Saturday 29th November historic day for Crossroads Community Church. Be inspired to read ‘All Hands on Deck’.

Sunday 30th November: Mark Absolom preached at Crossroads Community Church and did brilliantly. He spoke about hospitality which is very close to his and his wife Lesley’s heart. The children enjoyed having Lydia around and were bowled over by the little presents that she gave them. A sheer pleasure and total delight. What a blessing they were! 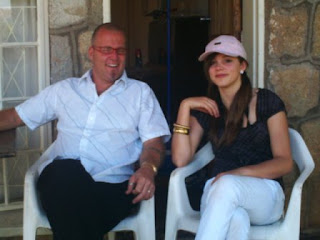 Mark and Lydia Absolom enjoying a moment before Mark’s preach.

Posted by ebenezer agricultural training centre at 4:31 AM