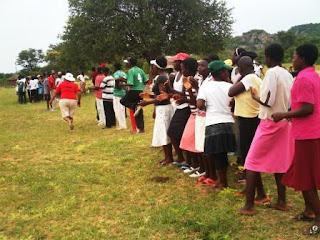 Spectators at the soccer match.


Netball – No! Volleyball – No! More like soccer. The Ebenezer team had their very first soccer match this year against the Family Impact Cats from Bulawayo. We played the match at Nduna Primary School – one of the local schools in the community.
The match started off rather slow with each team “sizing” the others skills and fitness levels. The Family Impact Cats(FIC) supporters broke out in song and dance which was rather entertaining. Ebenezer scored the first goal but alas, we were off side and the goal disallowed. Hot on that goal came one from FIC. The supporters were ecstatic. Ebenezer managed to equalize in the first half of the match. 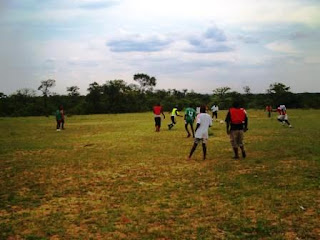 Ebenezer (green & white) versus Family Impact Cats (red bibs)
The second half was interesting. The more mature and older FIC were exhausted whilst the energetic Ebenezer team ran with more gusto. They scored again and Ebenezer were in the lead 2 – 1. The Ebenezer supporters ran onto the field to show just how supportive they were of the team. Ebenezer missed more goals but the end result was Ebenezer 2 and FIC 1. GREAT start to the year! 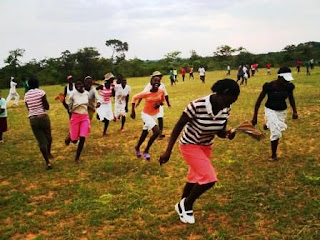 It’s a goal! Ebenezer supporters run onto the field