On Friday 22 August, 36 local farmers from within the Kezi community gathered at a demonstration plot approximately 400m away from Ebenezer and received Farming God’s Way training from Stephen Manhanga. This is a brief account of how the training went……
We had an amazing day on Friday 22 August 2008. God really spoke to us and the Holy Spirit moved in our meeting. We had 36 people attend from the community, for the day of training and planting a Well Watered Garden.
It started off slow with only 2 people arriving on time and so we began the meeting with them to honour them for being faithful and good time-keepers. Others soon joined the meeting and we had a good time sharing together about farming – Genesis 2:15, time management – it’s important to do things on time and how important planning is on a farming calendar – by the end of October, the farmers need to be planting and they need to know what crops they will be planting.
Farmers listening attentively as Stephen shares principles on Farming God’s Way 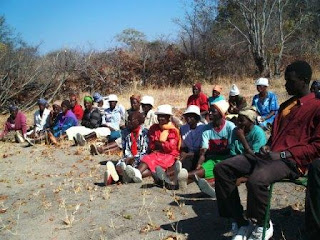 Stephen encouraged the farmers to start gathering manure, compost or fertile soil from an anthill to use as a basal fertilizer and then to prepare their planting stations(holes). He encouraged those who had livestock or chickens to be prepared to sell their livestock in order for them to purchase seed and other necessities for the family.
Stephen doing a demonstration on the ground 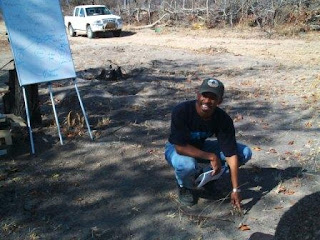 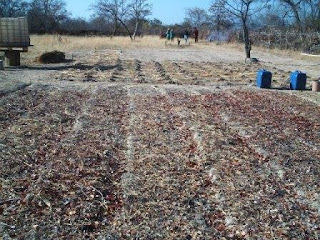 Everyone participated in digging holes with spacings of 75cm x 75cm, putting compound D as the basal fertilizer using measuring cup number 8 before putting 3 seeds in a straight line per planting station. The seed used was SC 513 which is a hybrid seed of medium variety. The seed was then covered and mulch was put between the rows. Mulch is important for moisture retention.

A question and answer session was held and the farmers were motivated to put a Well Watered Garden at their homes. Their eagerness was so evident as they said they would be ready to plant in 7 days.
God’s Way is definitely the Only Way!
By Stephen Manhanga
Adapted by Molly Manhanga 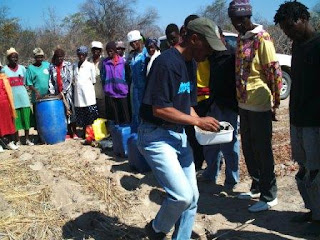 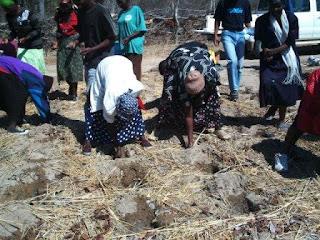 Maize seeds being planted by ladies at the training

Seeds being covered by men at the training 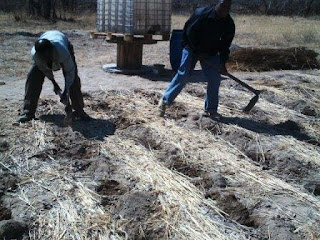 Posted by ebenezer agricultural training centre at 8:43 AM