An Inferno Near Ebenezer

“As the mountain surrounds Jerusalem, so does the love of God on those who fear Him.” 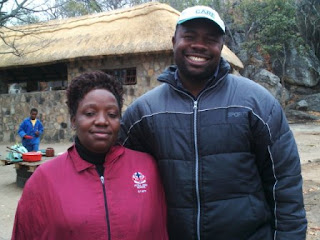 George and “P”
This was the word of God that became a reality to the newest members of the Ebenezer team – George and his lovely wife “P”, on the second day of them being at Ebenezer. They received what has become known as the “baptism of fire”.

On Wednesday 10 September, at approximately 9:00am, while the apprentices were carrying manure to their fields, large clouds of smoke could be seen south east of Ebenezer. By lunch time, the inferno was drawing closer to Ebenezer. The fierce, blazing sound of flames and the engulfing smoke alerted the apprentices and the staff that this was no ordinary fire. People paired up and ran in different directions. The team started fire guards in the hope of extinguishing the fire. The prevailing wind seemed to make their efforts futile as the fire “jumped” and started burning other areas. Severe heat could be felt from about 30m away as the flames lept to heights of between 7 – 10m high.

Amidst this pandemonium, some people were praying, others taking water in containers to the “front-liners” while some used hosepipes in an attempt to quench the fire. Animals, snakes, grasshoppers and so on were seen trying to escape but to no avail. After many hours of hard work and inhaling smoke, the team managed to bring the inferno under control. At about 10:00pm there was a sense of “we have won this battle”. It is an experience we’ll never forget. 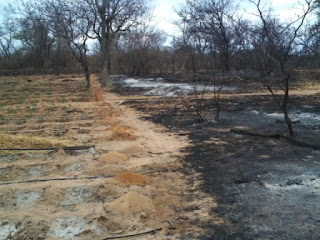 Burnt areas near the apprentice plots
The aftermath is still evident as large areas of land around the apprentice plots are burnt and looking lifeless. Amidst the shock, tiredness and reflection on this inferno, testimonies of God’s goodness were heard:
v Some felt God’s amazing peace in the midst of the turmoil
v Some witnessed flames being diverted after prayer had gone out.
The reality of what could have happened has left some apprentices speechless. The general feeling however is that a fire like this had never been seen before and it is God’s amazing hand that kept everyone safe, with minimal damage being done to some tomatoes, a drip kit, the fence near the demonstration plot and some homes in the community near the Ebenezer boundary. 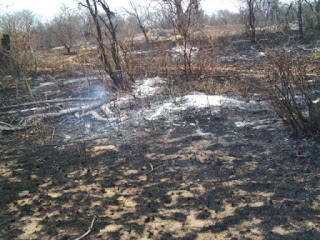 Smouldering trees after the inferno
Written By Molly Manhanga
Posted by ebenezer agricultural training centre at 2:20 AM