Graduates take on the Ebenezer chicks.....

Ebenezer graduates praying over the chicks 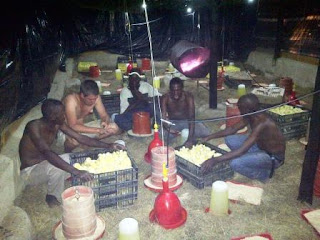 As part of their holistic training Ebenezer graduates received 3000 chicks from Beyond Belief (A new initiative to help rural communities – Look out for the 'Beyond Belief' Blog coming ‘live’ soon) to raise as broilers. This is the second batch of chicks that Ebenezer has received. The first batch was raised by the model farmers. They did extremely well. Even on a commercial level it should take 51 days for each chicken to reach a weight of 2 kgs. The model farmers achieved 2.2 kgs in 41 days. Brilliant Khoza, one of the model farmers said; "They grew well because we prayed over them. They were not our chickens. They were God’s and He gets the glory”. Brilliant would also be found late at night playing his guitar and singing hymns to the chickens. “The praise songs make them happy chickens.” Nice one!

This has been taken to heart by the graduates who prayed for their chicks as they were offloaded and who also insist that the Union Brothers – Ebenezer’s own male vocal group who have cut 2 CD’s, practice their singing outside the brooder house.

Looking after day old chicks is extremely tough. The four graduates have to make sure that the temperature, feed, water and lighting are just right. For the first two and a half weeks the chicks have to be monitored 24 hours a day. In addition to this, the graduates still have classes and have to tend to their fields. They will have some hard lessons to learn over the next six weeks but the model farmers and Ezra Prescott from Beyond Belief are there to guide them along the way.

Ebenezer has set the standard for others to follow.


Edited by Molly Manhanga
Posted by ebenezer agricultural training centre at 3:20 AM