Smiles all round for Mkhululi Ncube 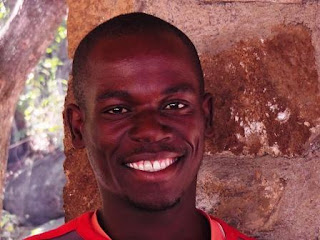 "To be or not to be" was the question for Mkhululi Ncube as he went to pay the bridal price for his sweetheart, Caroline Moyo. What started out as a dream turned quite sour as he realised he'd have to pay quite a price to marry her. But, to update you, Mkhululi will finish "paying" for his "to - be" bride at the end of this month and then he'll start working on the programme for his wedding. He is hoping to have a church wedding in August 2011. So, it's all smiles on the wedding front.

Another happy moment for Mkhululi was when his "artificial" or false tooth arrived two weeks ago. Mkhululi was often teased by friends about his missing front tooth. He fell on a rock in 1996 and cracked his tooth which eventually fell out in 1998. Thanks to Rod Spencer - Ebenezer's marketing guru, Mkhululi now has a new front tooth and he is smiling with joy.

It's great to see this that Cooper is smiling all round.


Posted by ebenezer agricultural training centre at 6:28 AM