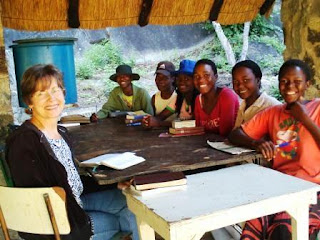 Marlene Poe with the graduate and 2nd year lady apprentices

Marlene spoke about Lydia being a businesswoman (had money) who responded to the message, became a worshipper and invited Paul into her home where they began to meet. Interesting things were happening in Philippi. There was also a slave girl (poor) who followed Paul around and he discerned that there was something wrong with her spirit. The girl was delivered. Paul and Silas ended up in prison where they continued to praise God. As they were singing one evening, an earthquake happened, their chains fell off and they walked out of the prison cell. As a result, the jailer (Had Roman influence and authority) and his family were saved. Exciting! The Church is Philippi was forming and people loved one another who ordinarily wouldn’t even have been friends.

Paul writes a letter to the Philippians:

Chapter 1 he tells them how much he loves them and about him being in chains to advance the Kingdom. The hardships though didn’t keep him from sharing the gospel and others were strengthened to share the gospel with boldness.
Chapter 2 talks about Christ’s humility
Chapter 3 encourages us not to have confidence in ourselves but in Christ and to press on to live for God – far above anything we could desire.
Chapter 4 encourages us to stand firm in the Lord and in His love. It also encourages women to get along and not to allow little differences to divide us. We need to prefer one another and strive to keep the unity.

We look forward to next week’s session on little differences that can cause conflict amongst women.

Summarised By Molly Manhanga
Posted by ebenezer agricultural training centre at 2:13 AM