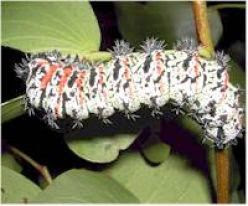 
Mopani worms are normally seen at Ebenezer between March/April and now December/January. See a butterfly and you think of a worm! The metamorphic process is quite incredible!

Everywhere in the world people are interested in tasting new dishes and delicacies and that includes crickets, ants, scorpions etc. So why not try the Mopani worm? Now I’m told by Mopani worm lovers that this is truly a delicacy. I’ll take them at their word! There are many Mopani trees around Ebenezer and the worms can either be picked from the trees or from the ground. Mopani worms are like caterpillars. You hand pick them by the tail and squeeze out 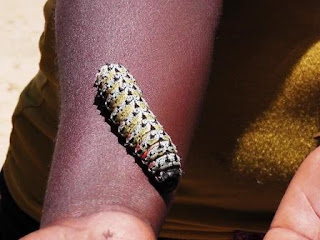 the insides like how you squeeze toothpaste. Slimy green contents from the gut come out. This doesn’t sound great but again, I’m assured that once sun dried, roasted or smoked, they taste divine. Mopani worms are highly nutritious and a good source of protein. Many folk in the rural areas eat Mopani worms.

It was quite fascinating watching one of the first year apprentices rolling a Mopani worm in her hand and letting it crawl on her arm.

By Molly Manhanga
Posted by ebenezer agricultural training centre at 6:58 AM